To oversimplify the facts, the Appellant arrived in Australia as an unauthorised maritime arrival (UMA) and thus was barred under s 46A(1) of the Migration Act 1958 (Cth) from making any visa application while in Australia. The Appellant was taken to immigration detention.

The Minister sent the Appellant several letters, inviting him to apply for a protection visa. 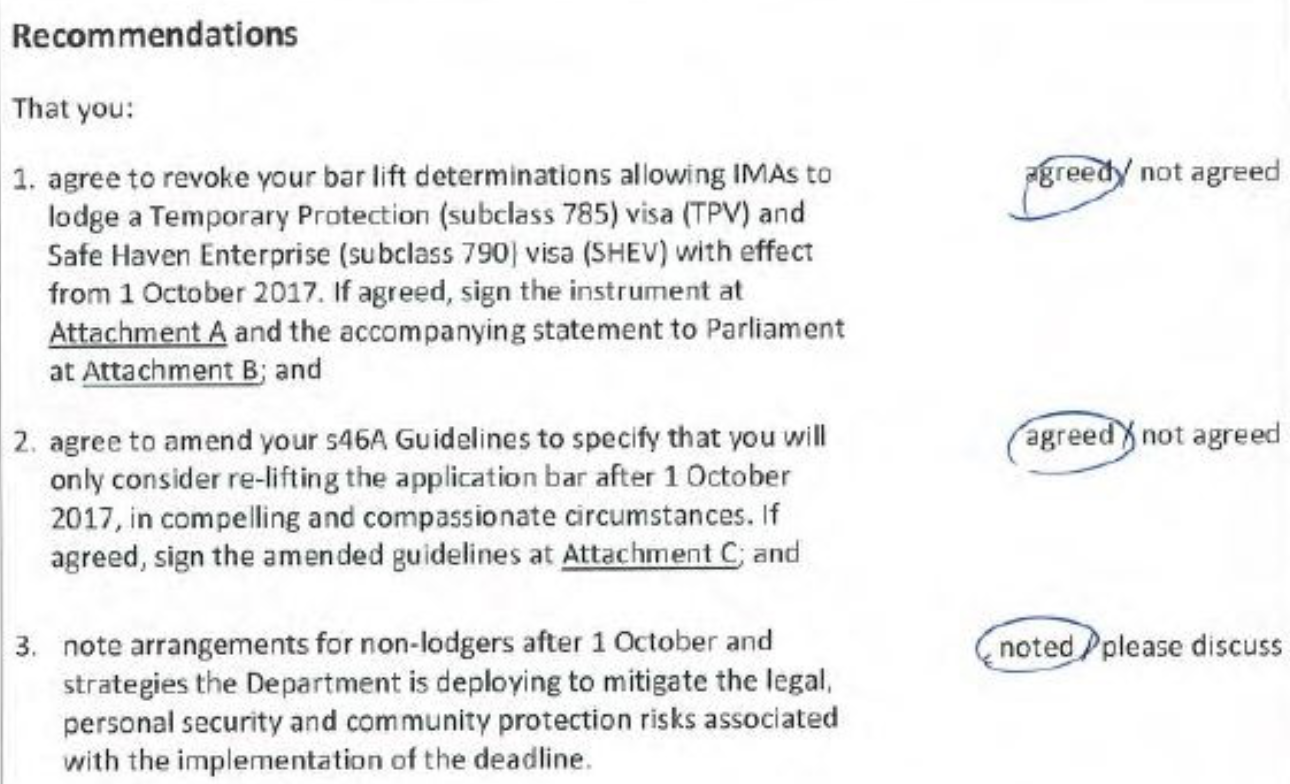 9.    IMAs who do not lodge before the deadline will be referred to Status Resolution officers in the Department’s State and Territory offices. They will be granted a Final Departure Bridging E visa. Community Protection Division has begun assessing the vulnerability of [UMA]s who have not lodged a TPV or SHEV application to determine their eligibility for ongoing support if they do not engage in the process. Those with no identified vulnerability will have services ceased and income support removed as per the 2017-18 Budget measure, immediately after the application deadline, those identified with a potential vulnerability will be invited for interview to determine next steps towards departure and if support services are required. Interviews will be scheduled from 5 October 2017. The specific criteria guiding the Department’s decision making in relation to support services are that the person is unable to depart Australia due to:

10.    Concurrently, the Department will undertake an assessment of each [UMA]’s entry interview, records of any previous claims raised and country information to identify any potential protection based barriers to removal. If non-refoulement issues are raised that suggest that removal might be in breach of Australia’s obligations under international law, the Department will prepare a submission for your consideration setting out options for status resolution, including re-lifting the bar to fully assess protection, or granting a long-term Final Departure Bridging E Visa.

The Minister issued guidelines to the following effect:

Cases should be referred to me for consideration of the exercise of my public interest power where:

•    [An unauthorised maritime arrival] has raised protection [sic] plausible protection claims, did not lodge a TPV or SHEV application before I revoked their initial s46A bar lift determination with effect from 1 October 2017, and has objective evidence of compelling and compassionate reasons that were beyond their control for missing the application deadline.

That revocation took place on 1 October 2017 and applied not only to the Appellant, but to a cohort of individuals which included the Appellant.

Following revocation, the Appellant sent the Department a protection visa application accompanied by a submission arguing for his matter to be referred to the Minister for consideration to lift the s 46A(1) again.

A Departmental official known as an ‘Informed Referral to Status Resolution Officer’ (IRSR Officer) assessed the protection visa application as not having "objective evidence of compelling and compassionate reasons that were beyond [the Appellant's] control for missing the application deadline". In making that assessment, the IRSR Officer took into account relevant country information, but did not invite the Appellant to comment on that information before declining to refer the matter to the Minister for consideration.

The Appellant applied to the Federal Circuit Court (FCCA) challenging a decision to remove him under s 198(2), but the FCCA dismissed that application.

The Appellant was then released from immigration decision and ultimately appealed the FCCA's decision to the FCA, but on a different ground.

Question 1: Was the exercise of the revocation power in s 46A(2C) subject to procedural fairness?

Question 2: If the answer to Question 1 is "yes", was the Appellant afforded procedural fairness in the exercise of the revocation power in s 46A(2C)?

Question 3: Did the Minister make a personal procedural decision to consider the exercise of his powers under s 46A?

Question 4: Was a sufficient interest of the Appellant affected?